Ignác Stuchlý was born on December 14th, 1869, in the small village of Boleslaw in Upper Silesia, which is now a part of Poland. His parents were Štěpán and Marianna (né Procházková). Together with his parents and two older brothers, the family lived on a farm. He was baptised on December 15th, 1869 in the Church of St. Lawrence in Píšt, which is today’s Czech Republic. For eight years, he attended the local German School, where he was greatly influenced by his teacher, Jan Kolibaj. He worked in agriculture until he was 22 and he loved horses. 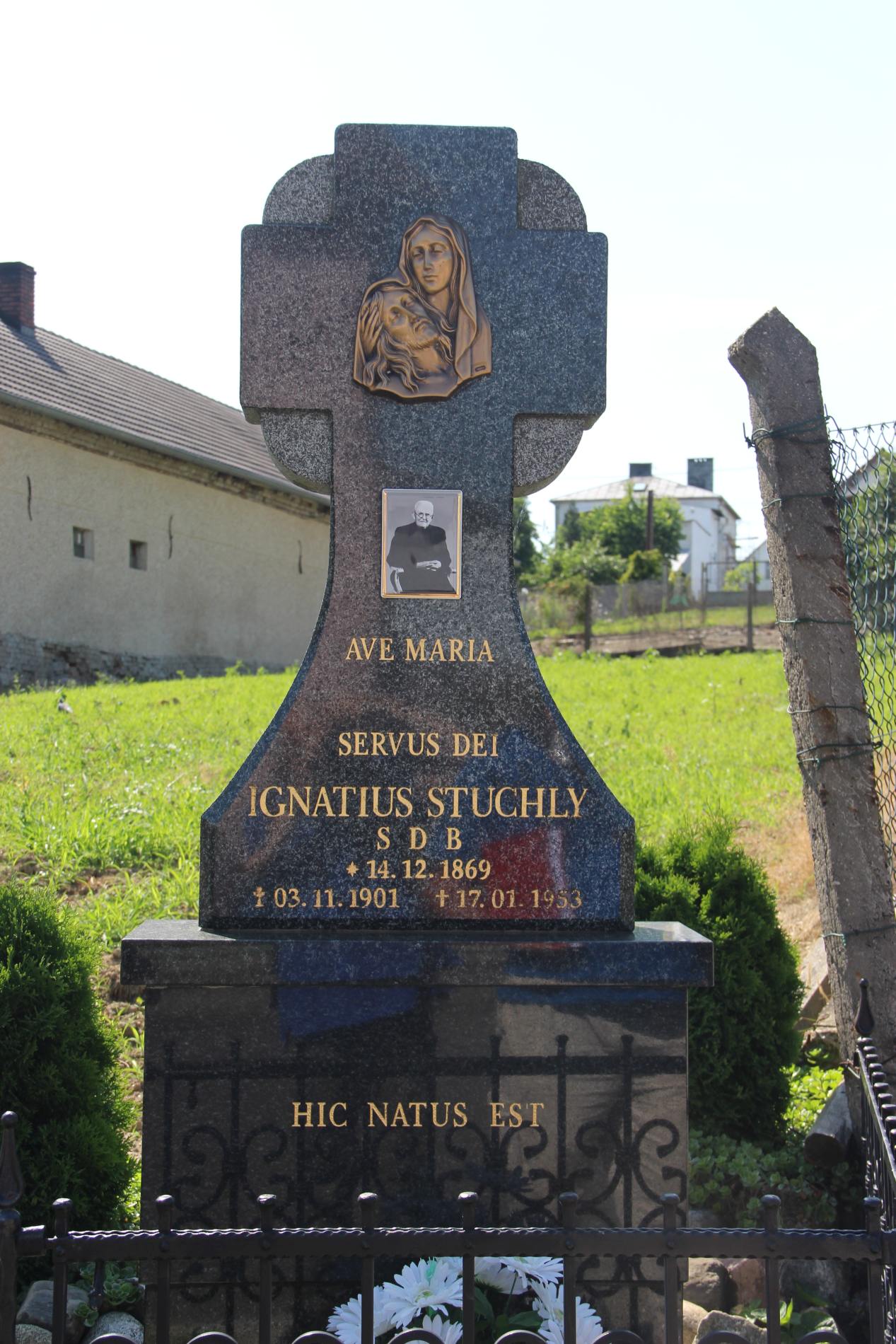 The Road to a Calling

Ignác’s path to his priestly calling was by no means straightforward, it was actually rather indirect. In 1891, he felt a calling to a priestly and religious life. Because he was 22, however, this was viewed at the time as a late calling. He decided to contact his friend, Fr. Angel Lubojacký and was invited to study for two years at the Svatý Kopeček monastery in Olomouc and later to Fr. Lubojacký’s private secondary school in Klímkovice. During his studies, he was hardworking, humble and focused. Unfortunately, Fr. Lubojacký’s school was closed and Ignác was forced to search for a new place to realize his calling. He travelled around many monasteries in Bohemia and Moravia and conducted pilgrimages Our Mary of Hostýn, followed by Our Lady of Velehrad, where he asked to be accepted into the Society of Jesus (Jesuits). He was accepted, but the final say was reserved for Fr. Jozef Klváč, who said:

“You will not join the Jesuits, you will join the Salesians, with Don Bosco in Turin. I will write to him right away! Go home and wait for further instructions!”

Obedient Ignác went home and received a telegram after three days, from Blessed Michael Rua himself: “You are accepted, come at once! Rua.” This changed Ignác Stuchlý’s life forever. 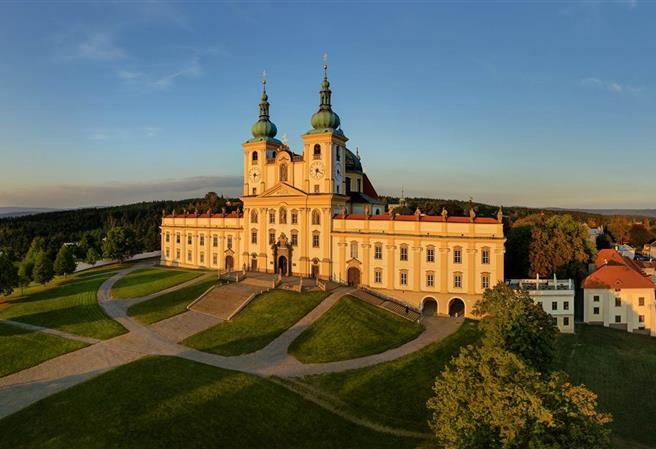 Being a Salesian in Turin

Ignác arrived in Turin on the Feast Day of the Nativity of Mary on September 8th, 1894. He was assigned to the group of Polish aspirants and housed in the Salesian centre in Valsalice. This Salesian home contained the remains of Don Bosco between 1888-1929. It was a place with a thoroughly Salesian atmosphere. It was here that Ignác would meet many students of Don Bosco and many important Salesians, who came to visit the remains of the saint. Thursday trips around Turin allowed Ignác to visit the main parts of the Salesian works, including the Basilica of Mary Help of Christians. 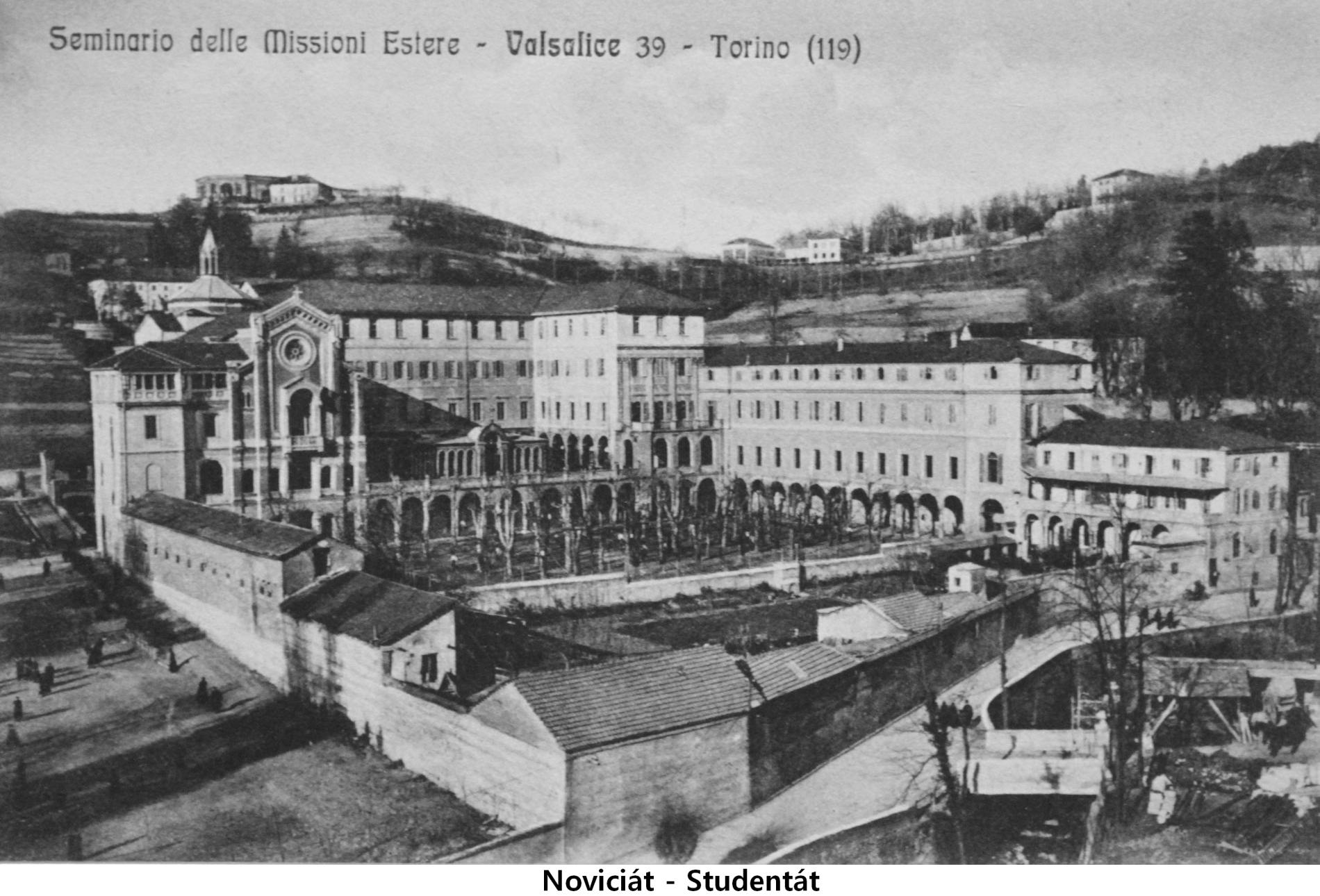 A Dark Night and Perpetual Vows of Consecration

After a year spent in Valsalice, Ignác was transferred to Ivrea, 50 km from Turin. Ignác was a humble student who liked to pray and approach his work with diligence. It was during this time that he became more spiritual and steeped in the teachings of Don Bosco and the Salesians. This time was also a time of doubt. Facing a crisis, he went to see the Salesian Rector Major, Michael Rua, about his internal issues and doubts. On the night before consecrating himself as a novitiate, Fr. Rua told him to not doubt himself and Ignác immediately said his Perpetual Vows on the next day, on September 29th, 1896. From this moment on, his doubts disappeared, never to reappear. The dark night had come and gone.

After his novitiate, he began studying philosophy and helping at a local agricultural school, because the Salesians wanted to send him as a missionary to South America. During his studies, Ignác was also able to meet many senior Salesians, especially Salesians that had personally known Don Bosco, people like Michael Rua, Pavel Albera, Francesco Cerrutti, Giulio Barberis and others.

At the end of his second year of studies and on the advice of Don Barberis, Ignác applied to be sent to be a missionary in South America. A short while later, he was saying confession with Don Rua, who told him to tell Don Barberis that his mission will be in the North. This changed the life of Ignác forever. 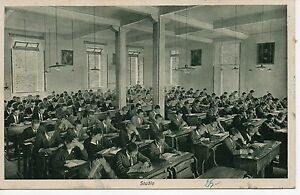 In 1897, Don Stuchlý was sent to the Salesian convent of St. Alois in Gorica, which is on the border between Slovenia and Italy (then a part of Austria-Hungary) to be a teacher and caretaker. During this time, he became an indispensable helper to the convent director, Don John Skarapon and even helped during the construction of new premises. In 1901, he was named prefect (economist) of the entire convent, taking care of the economic issues. 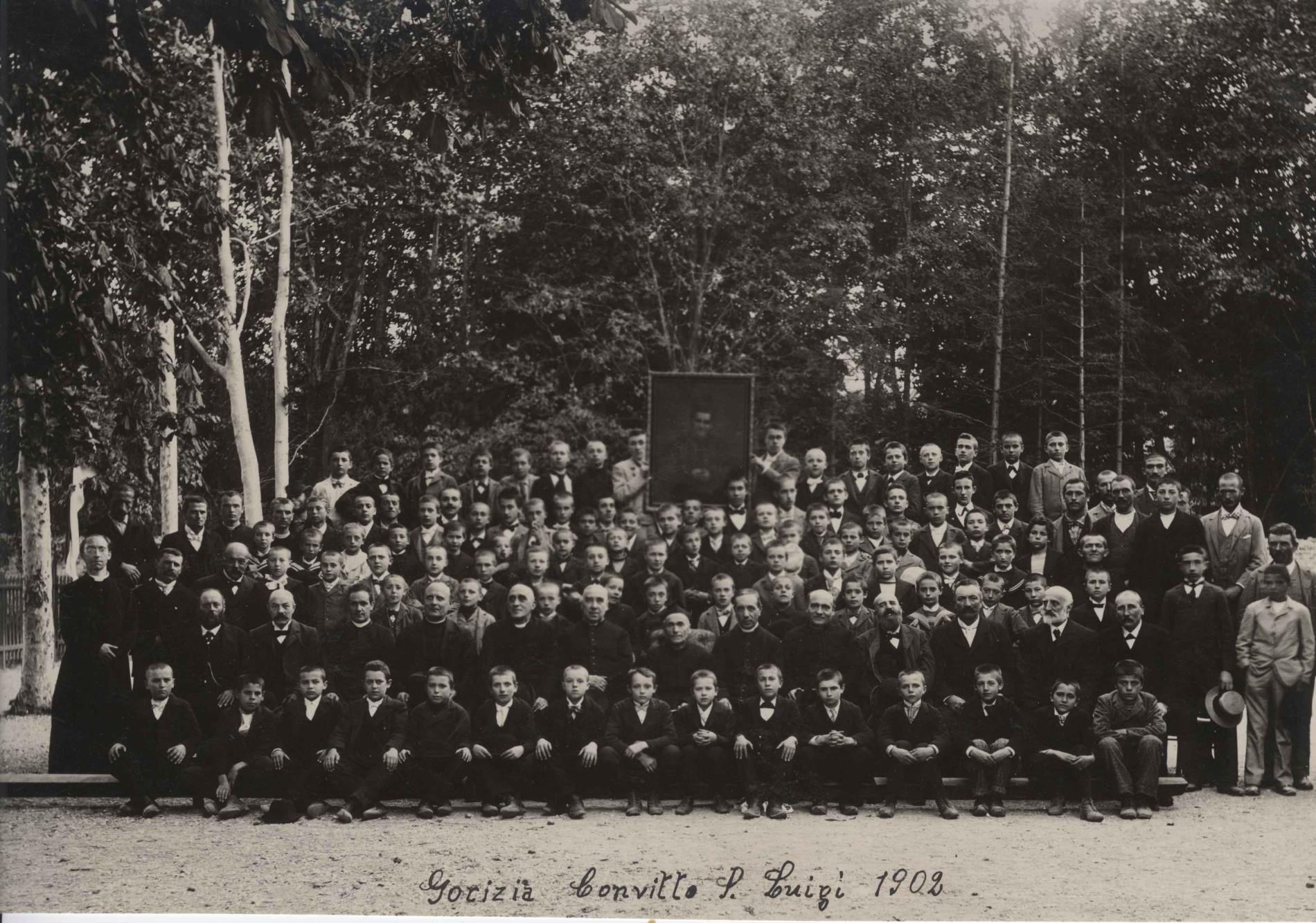 On November 3rd, 1901, in the chapel of the Bishop of Gorica, Jacob Missio, Ignác Stuchlý became a priest. It was in Gorica the Ignác matured into a true Salesian and where he first started living a true Salesian life. He was very liked by those around him and he was very happy there.

On October 10th, 1910, Ignác arrived in Ljubljana, to help save the local Salesian centre, which had many economic problems. After being greeted, he immediately proceeded to the chapel, where he consecrated all his work to Mary, especially the completion of the church dedicated to her. During his time in Ljubljana, Ignác was known as a humble, hardworking, intelligent and kind. During the hard years of war, he had many difficulties in keeping up the Salesian house in Ljubljana and the novitiate house in Radna. He looked out for money and found many workers, who were willing to help him with Salesian works. He also spent much time doing confessions and visiting the sick. It was during this time that he became one of the most popular Ljubljana Salesians, always ready to lend a helping hand, while being humble and joyful.

Building a Church in Ljubljana

On the outskirts of Ljubljana, in the district of Rakovnik, Don Ignác was able to finish construction of the Church of Mary, Our Lady, Help of Christians. Even though he served as the economist, most of his time was reserved for helping with the construction. He travelled all around Slovenia in order to gather funds, feeling at home in small villages and among peasant people. In the midst of this surrounding poverty, the new church was consecrated on September 8th, 1924, on the Feast of the Nativity of Mary. The statue of Our Lady, Helper of Christians, was blessed by the papal nuncius Pellegrino, and the church itself was consecrated by the first Salesian cardinal, Don Cagliero, the most renowned spiritual son of Don Bosco. 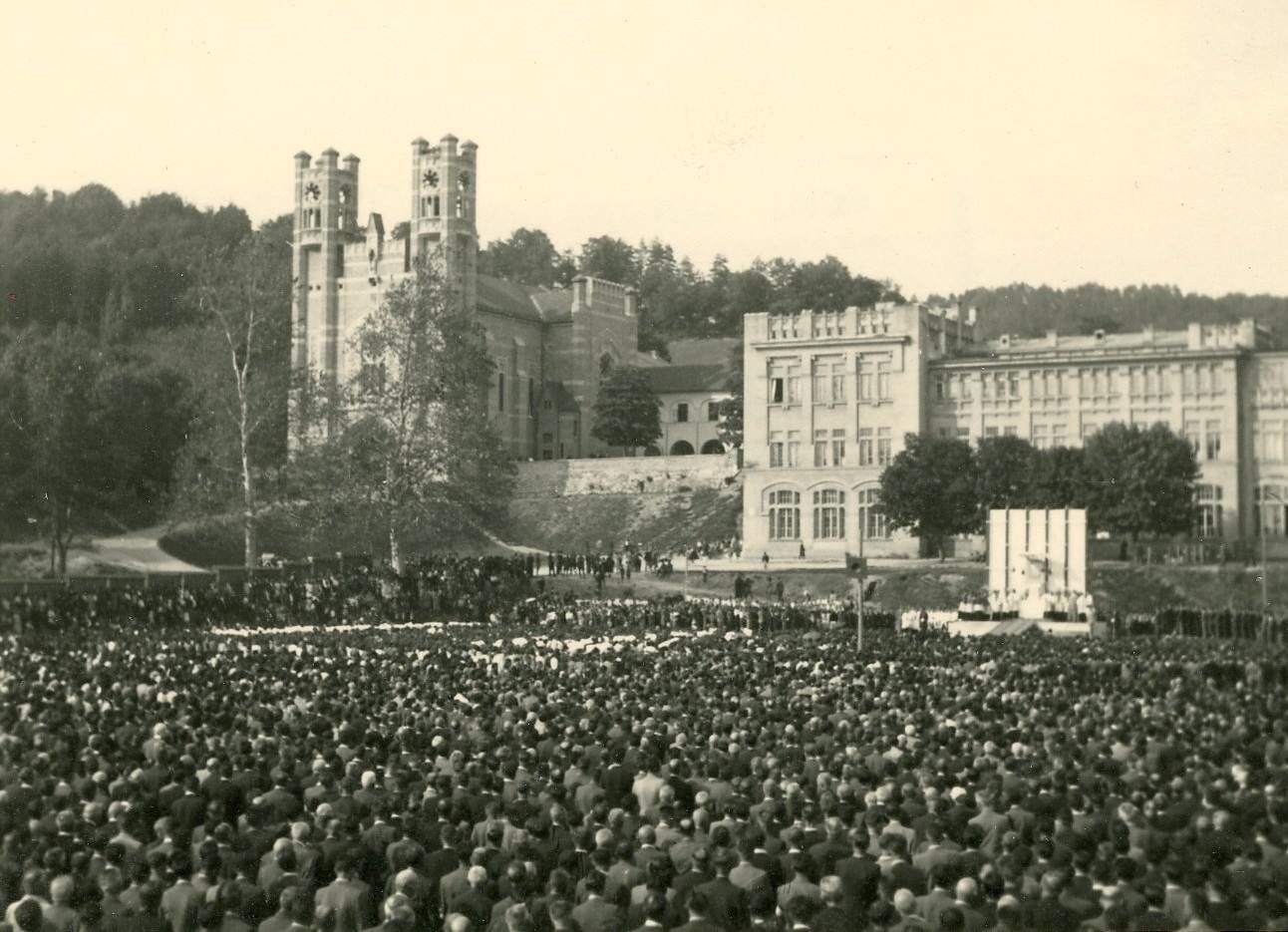 During Christmas in 1924, Don Stuchlý received a letter from the assistant to the Salesian Rector Major Filip Rinaldi, Pietro Ricaldone. The letter told him to come to Turin at once. At the age of 55, don Stuchlý was sent to the village of Perosa Argentina, in order to begin preparations for the creation of the Czech Salesian works.

Don Stuchlý arrived in Perosa on January 25th, 1925 and began preparations at once. 30 men from Bohemia and Moravia met here, although not all of them became Salesians for serious reasons. The three years spent in Perosa were some of the most trying in all of Don Stuchlý’s life, due largely to the absolute lack of funds. Despite these problems, Don Stuchlý was always happy and inspired his boys to be the same. He became their own Don Bosco. In 1926, Don Stuchlý and his boys visited Turin to see a Salesian missionary exhibition and many of them decided to go abroad as Salesian missionaries. Don Stuchlý was kind enough to let them go. 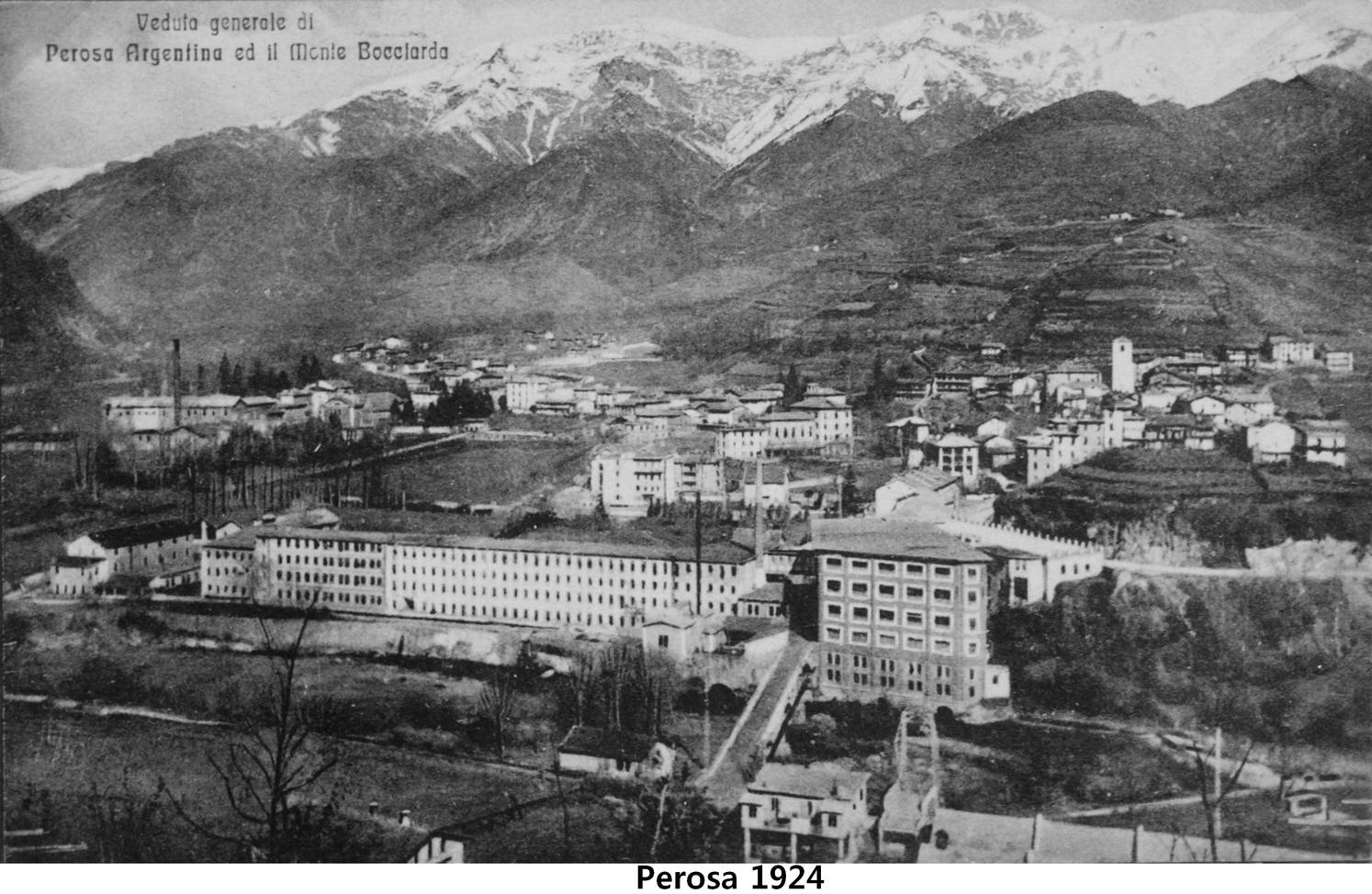 The new Salesian mission in Bohemia and Moravia was supported by Fr. Karel Klement and religion professor Mons. Dr. Augustín Štancl. There were quite a few places to choose from for establishing a Salesian mission, but the final choice was Fryšták, in Moravia. A house in Fryšták was bought from the Sisters of the Immaculate Conception. In 1927, Don Stuchlý was 58 years old. All other Czech Salesians and aspirants were at least 30 years younger than him and this was why he was chosen to lead the newly established Salesian works. As a firm believer in God’s love and grace, and with intercessions to Mary, Helper of Christians, Ignác took on his new role readily.

On September 28th, 1927, on the feast of the main patron of the Czech Lands, St. Wenceslaus, 17 boys and 3 Salesians arrived from Italy to begin their work. In order to ensure appropriate funds, Ignác travelled widely, collecting money and establishing contacts. It was very hard work. 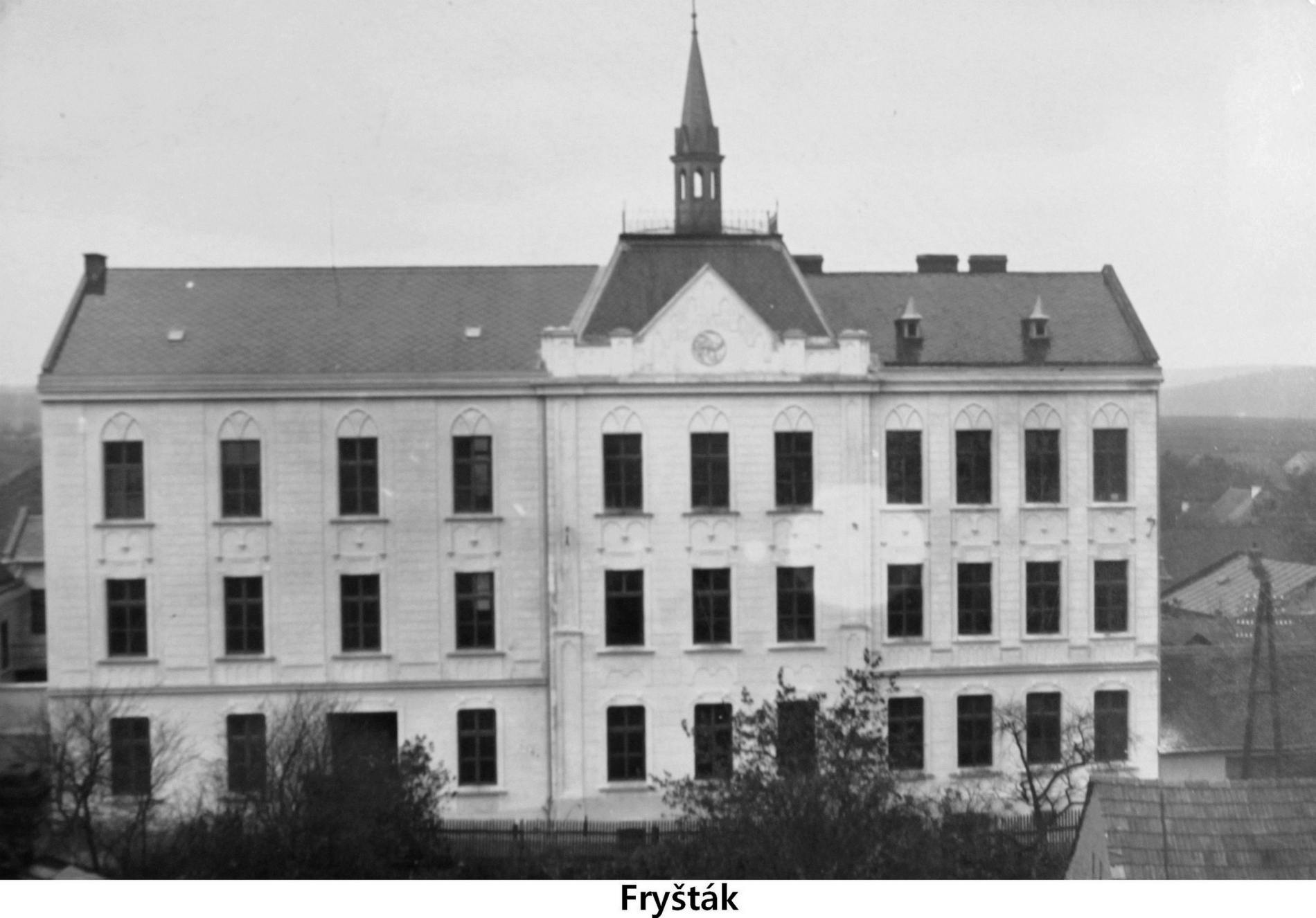 The next place where Salesians were set up, was the industrial town of Ostrava, in 1934. A Salesian house and a church of St. Joseph were built here, with Ignác becoming the first Director of the house. 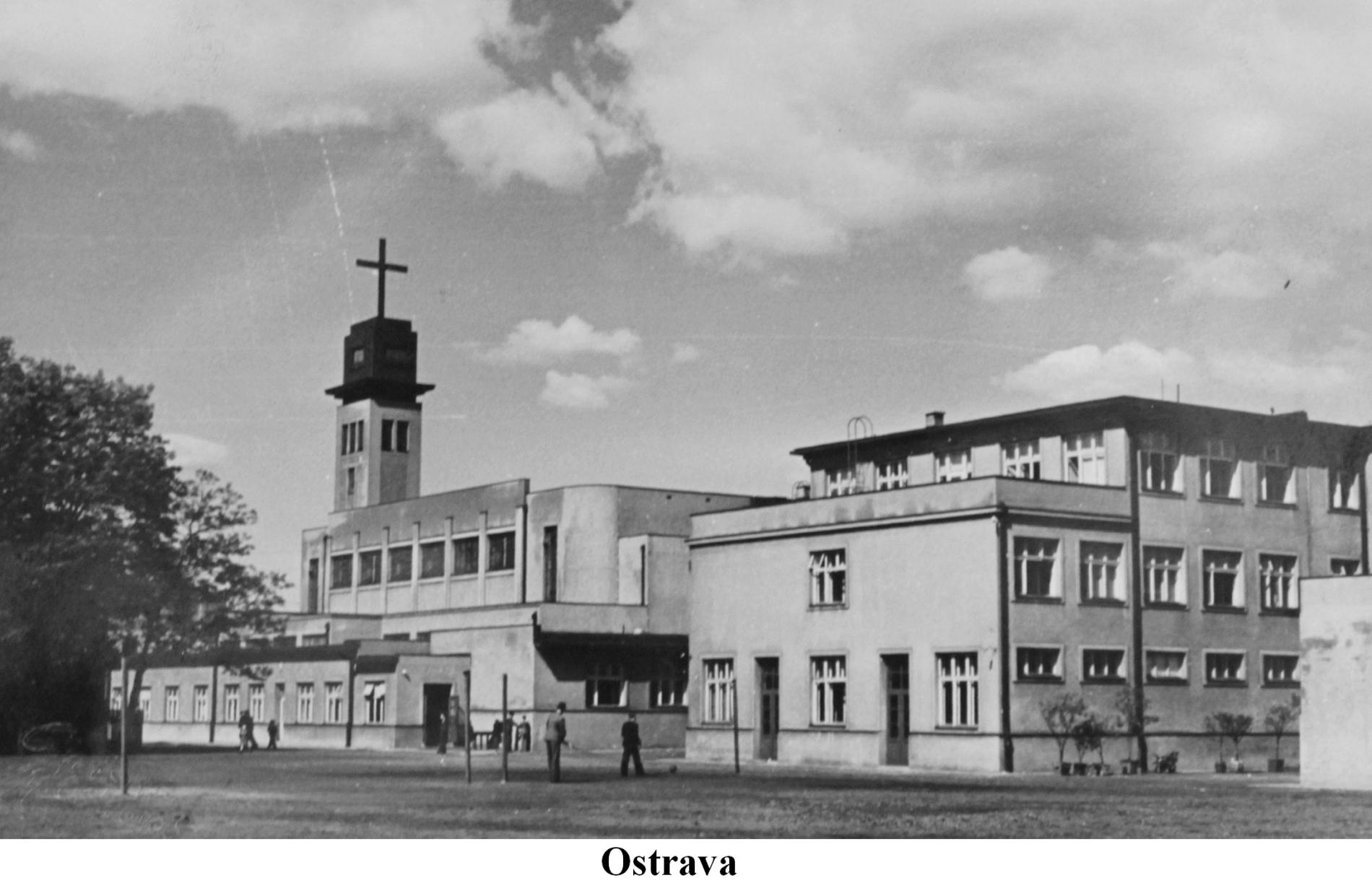 On September 15th, 1935, Ignác Stuchlý was named the first Inspector General (Provincial) of the newly established Salesian province in Czechoslovakia. The seat of the province was in Ostrava. During the pre-war period, Ignác and his Salesians worked on establishing new centres in Prague, Bratislava, Pardubice and Žilina. Despite the Great Depression, the Salesian works grew. From 1939, Ignác became the Provincial of the newly established Czech-Moravian Province. 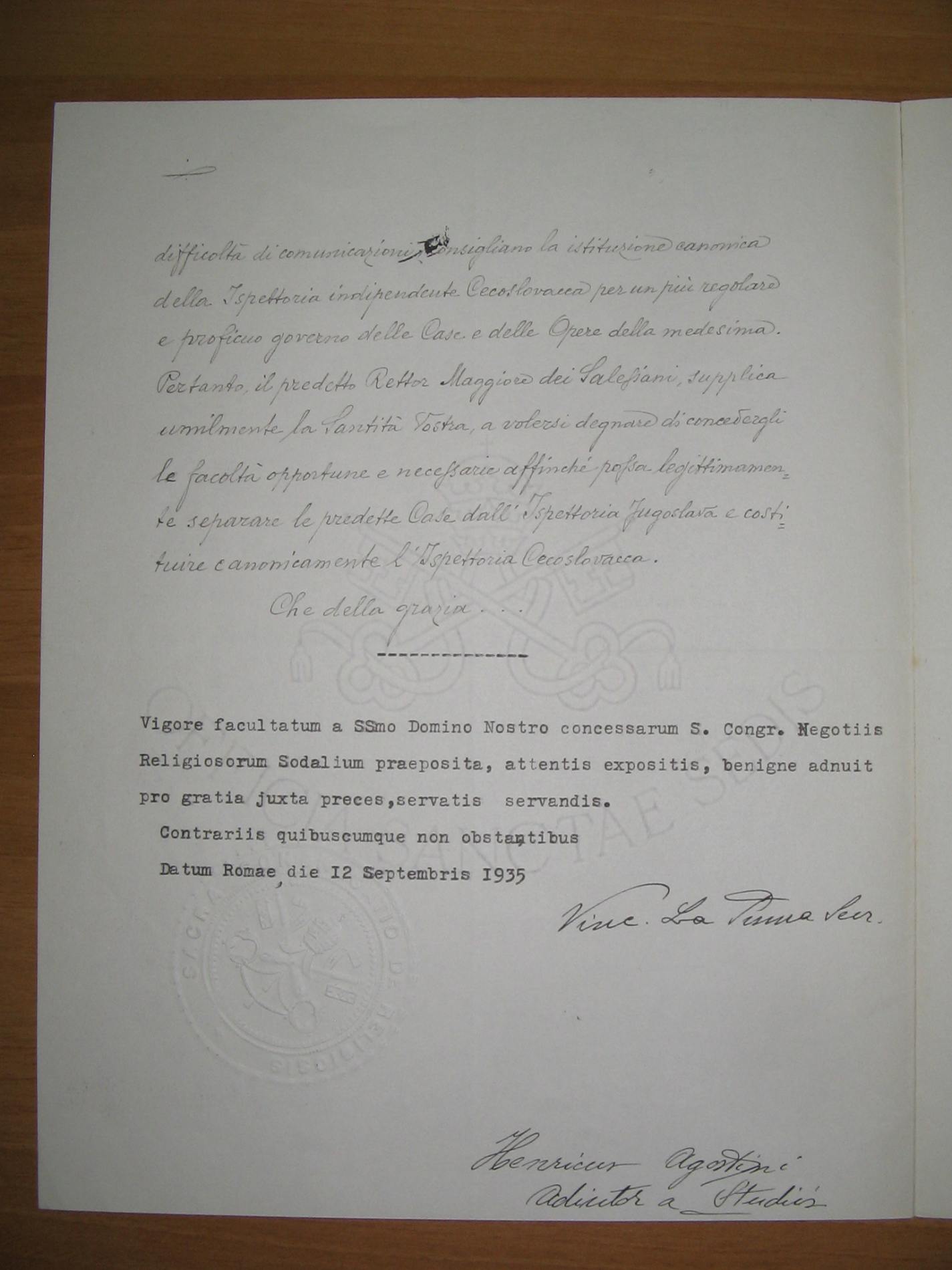 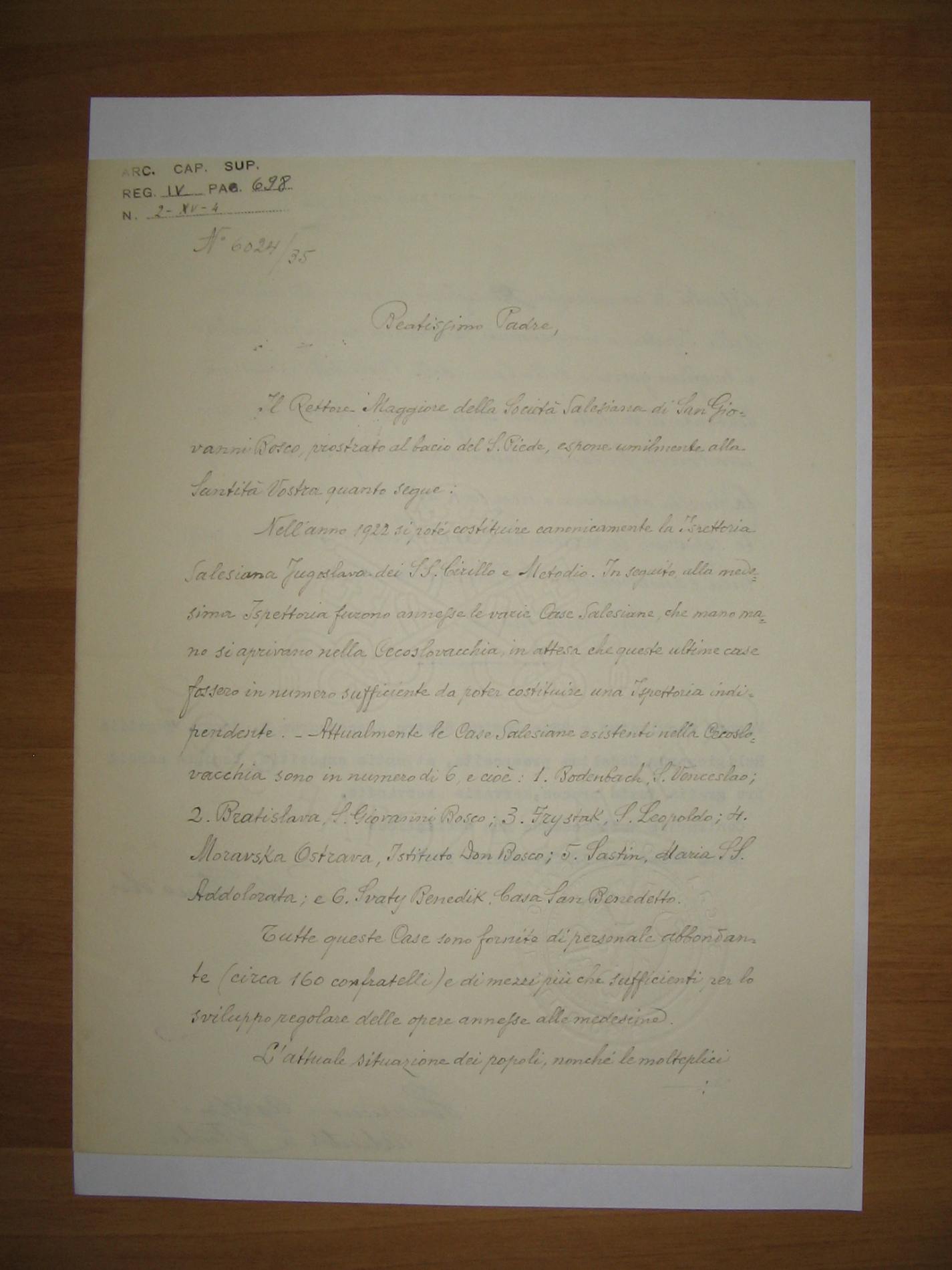 In 1942, the Salesian house in Ostrava was occupied by the German army and Ignác moved to Brno. His colleague, Štěpán Trochta, was arrested and 50 Salesians were sent to Germany for forced labour. In August 1943, the Germans occupied the house in Fryšták as well.

When the war ended, a tearful Provincial Stuchlý welcomed back each Salesian with open arms, grateful to God that no Czech Salesian had perished during the war. The homes in Fryšták and Ostrava were opened up for Salesians and aspirants. In 1947, there was a Salesian General Assembly in Turin, and Štěpán Trochta was named Bishop of Litoměřice. 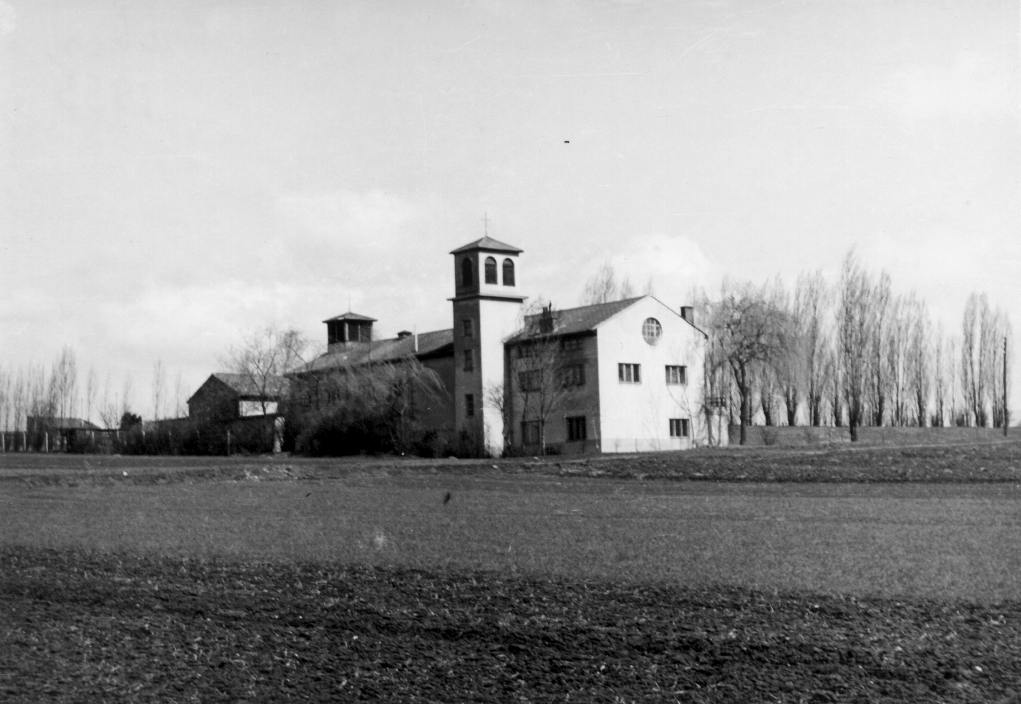 In 1948, Fr. Antonín Dvořák was named as the new Provincial and Ignác moved back to Fryšták, as the province received a new capital in Prague. In Fryšták, Ignác became a popular confessor and finally had time to read up on Salesian spiritual literature, such as the “Memorie beografiche”, which he had never had the time to read.

On the morning of March 5th, 1950, on the day Dominc Savio was canonized, Don Stuchlý fell over due to a stroke. As he slowly got better, there were always 24 Salesians on hand to help him if he needed anything. On March 15th, 1950, the Communist government sent commissars to take over the Fryšták house, before the police finally raided it on the night of the 13th of April, 1950. All the boys and Salesians were arrested and all Salesian houses were closed. Ignác was left all alone, but he received the devastating news and stayed calm. 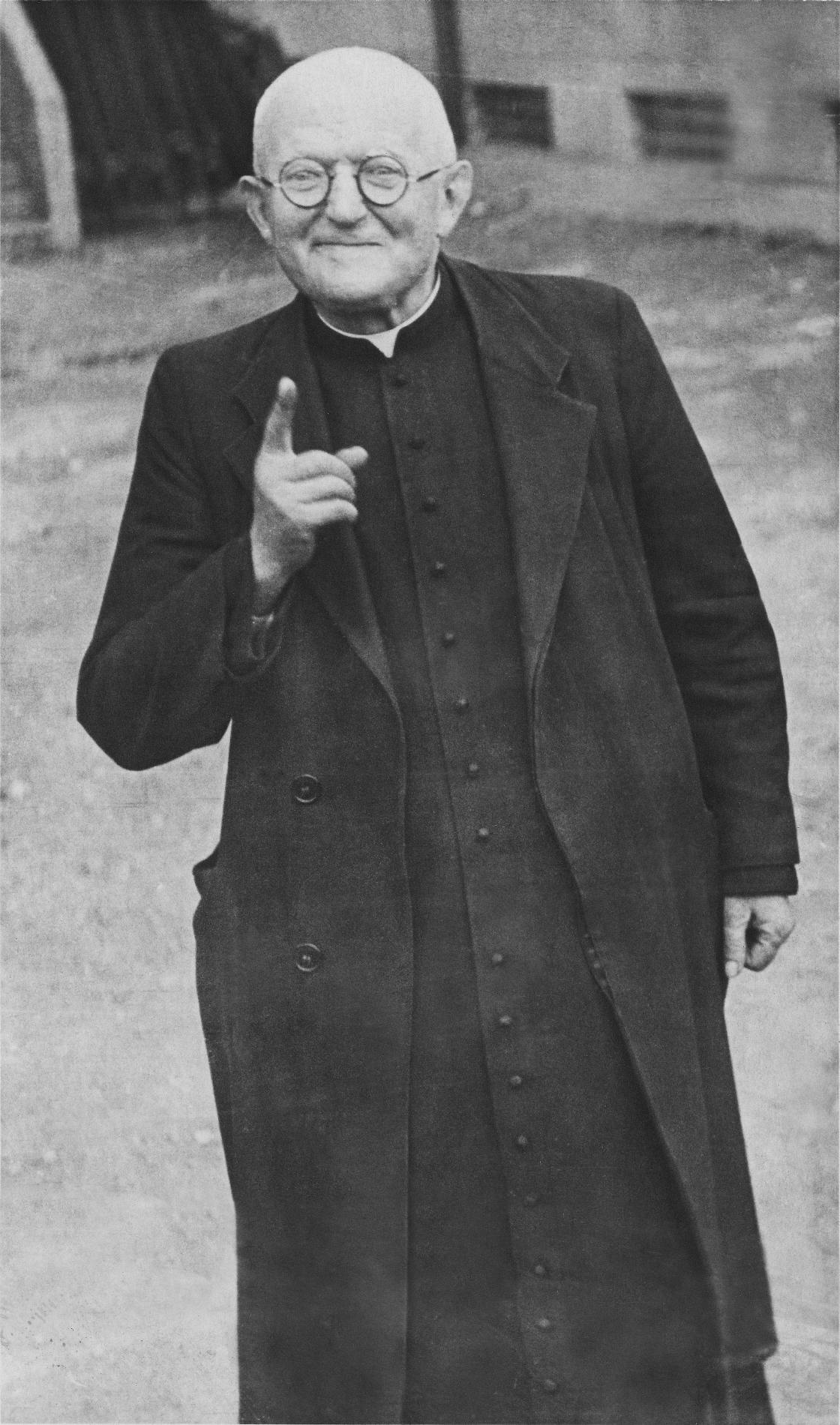 In 1950, Ignác was sent to the Franciscan sisters in Zlín and then on to a retirement home in Lukov. This home was a sort of prison as he was not allowed to leave or have visitors. Nevertheless, he remained cheerful and celebrated mass every day in the chapel. Some Salesian brothers got around security in order to visit Don Stuchlý, who always told them to hold on to their faith and keep going. On January 8th, 1953, he had a second stroke, from which he never recovered. Fully conscious, he suffered until his meeting with God.

On Saturday, January 17th, 1953, a Salesian brother, Fr. Rudolf Chudárek, was allowed to visit Ignác. Upon giving Rudolf a final blessing, he fell back and died. The funeral was held on Thursday, January 22nd, 1953 and all Salesians that weren’t otherwise in jail, the military or elsewhere, came to say their last farewell. This was quite a small number of people. The services were held by a Salesian co-operator, Father Martin Horký from Polešovice, and the eulogy was delivered by his former student in Fryšták, at the time a priest in Holešov, Father Jaroslav Janík. All those assembled there thought that they were burying a saint. 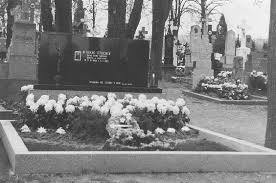